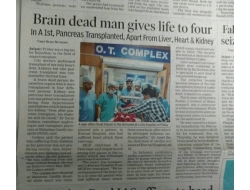 State first pancreatic Transplant is performed sucessfully at Mahatma Gandhi Hospital...
Friday was a big day for Rajasthan in the field of organ transplant.
MGH doctors performed transplant of not only liver and kidney but also pancreas transplant was conducted for the first time.
A brain dead person donated his organs which were transplanted in four different persons. Kidney and pancreas were transplanted into one patient who was suffering from hypertension and diabetes which damaged his kidney. 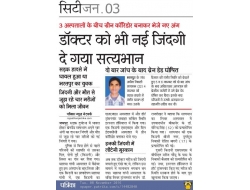 Twenty two-year-old Satyabhan was brought to Mahatma Gandhi Hospital on November 4 after he was injured in a road accident in Bharatpur. Though doctors treated his head injury, he was declared brain dead on November 6 by the hospital's committee.
Satyabhan's father gave his consent to donate his son's organs to save the lives of other patients, suffering from organ failure. His liver and kidney were transplanted at mahatma Gandhi hospital and heart was harvested and transported to Eternal Hospital with the help of traffic police. 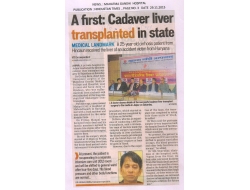 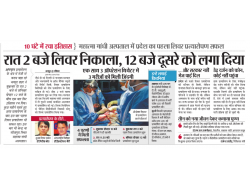 The first liver transplant in the state gave a new lease of life to 25-year-old Suresh (name changed) who was suffering from liver cirrhosis.

The surgery was performed consuming only three units of blood. Some surgeries exhaust 25-30 units of blood. Post-surgery, the doctors of Mahatma Gandhi Medical College and Hospital (MGMCH) looked happy on Saturday. They claimed that the condition of the recipient of first cadaver liver transplant was satisfactory.The doctors completed the surgery at 11am on Saturday. “The blood pressure of the patient is normal. Also, his urine output is normal. We are satisfied with the progress so far,” said Dr Giririj Bora who spearheaded the first liver transplant of the state. Dr Bora said that the next 5 to 10 days are important for the patient. “The patient had enlarged blood vessels due to cirrhosis. Also, blood clot ting was not normal. There was fluid retention (edema) in abdomen and chest area. He was having difficulty in walking. He required liver transplant as his condition was quite bad,” Dr Bora said.

After the surgery, the doctors shifted the patient to a three-bedded ICU meant for postoperative care of liver transplant patients. The recipient belongs to Hindaun City.

Dr Bora said that the patient was fighting a battle for life.

The ultimate treatment available for him was liver transplant. The number of such patients is quite high in the country. He said that the patient might have contracted viral infection during infancy which damaged his liver. Dr Giriraj Bora has an experience of conducting more than 1,400 liver transplants in Delhi. 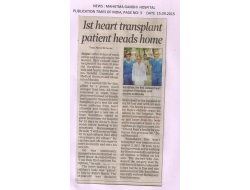 After 43 days of medication and monitoring by the doctors, first cadaver heart recipient of the state, 32-year old Surajbhann walked out hale and hearty from Mahatma Gandhi University of Medical Sciences and Hospital on Monday. 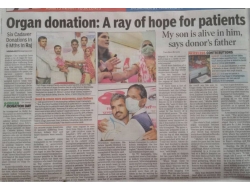 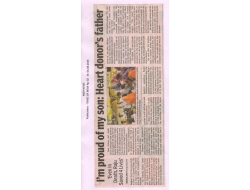 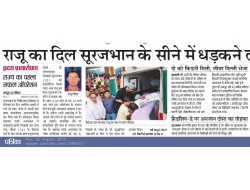 Mahatma Gandhi Hospital has created a history in the state by saving lives of four persons through one cadaver organ donation. First cadaver Heart Transplant was successfuly performed at MGH on 2nd August 2015

First Heart transplantation in the state of Rajasthan ( first in a privately owned healthcare facility in northern India ) has been performed  in the Mahatma Gandhi Hospital (MG University of MST) by the eminent and experienced Cardiac Sciences Team, headed by Dr MA Chishti. The heart was benevolently donated by the divine soul of a deceased brain dead donor to give a new lease of life to another  4 persons. 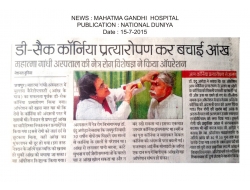 Doctors have performed one of the rarest neuro surgeries using the Navigation and Sonography Assisted Technique on Monday. This is the first time when Sonography technique has been used during a brain surgery. 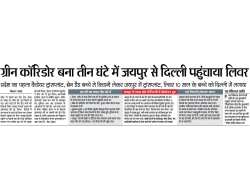 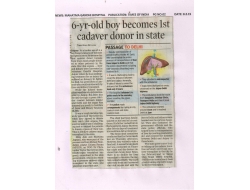 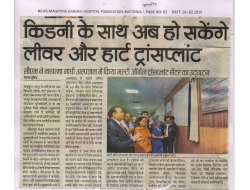 Apart from kidney now liver and heart transplant will be possible in MGH. 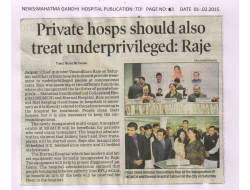 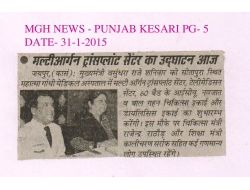 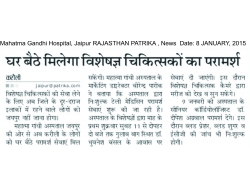 MGH has launched its Telemedicine center in Karauli , Rajasthan 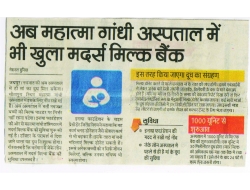 Mother's milk can save the life of an infant. It is like giving blood to an accident victim who needs it immediately,"  Mahatma Gandhi  Hospital has become the first private hospital in North India to have  signed an MoU with Inaya Foundation, an NGO to set up a mother's milk bank in Jaipur.

The concept of mother milk bank gained popularity in the state after one such bank became  operational in Udaipur in April 2013. The mother's milk bank has provided thousands of units of milk to infants in need and whose biological mothers were unable to feed them immediately after their birth. Each unit contains 30 ml of mother's milk. 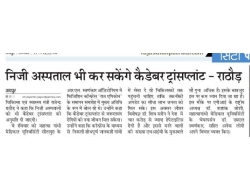 Medical and Health Minister Rajendra Rathore said the private hospitals will be allowed Cadaver transplant. Ross Medical University of Mahatma Gandhi on Sunday, Sitapur Goldsmith Auditorium Fijishin conference "Secrets Apikon" speaking as the chief guest at the closing ceremony were.  He needy Cadaver transplant patients will get new life. He went through the conference are well-researched information service in rural physicians must sustain the direct benefit of the public, to technical updates. 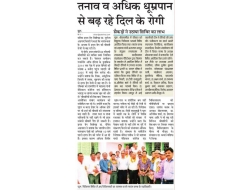 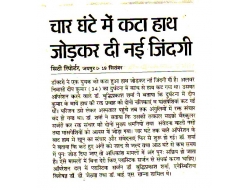 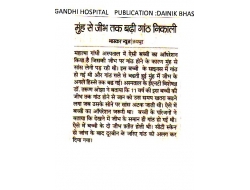 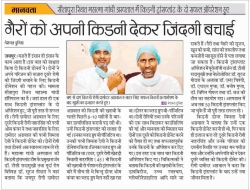 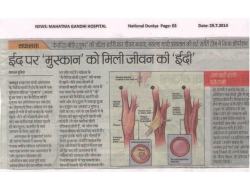 Mahatma Gandhi Hospital surgeons performed rare Carotid Body Tumor surgery “Muskan” got smiles on Eid Jaipur. Mahatma Gandhi Hospital, Jaipur surgeons has performed a rare ‘Carotid Body Tumor surgery’ of a 50 year old lady “Muskan” (changed name) belongs to Baramula-Kashmir. After surgery patient stayed in town for a few days and is headed home in time for celebration of Eid with smiles. Dr. M. A. Chishti, Chief Cardiac Surgeon informed that patient had been suffering from the ailment for over a year.


CT Angiography revealed that the tumor was engulfing the Carotid arteries (which supply blood to the brain) and four nerves which control the voice box and swallowing. This operation is technically challenging and even a slight mistake can cause a stroke and problem with speech and swallowing. Special technical skills and experienced team are required to perform this operation.
Dr. Chishti said- this operation took two and half hour to perform and Dr. Varun Chabra,
Dr. Gaurav Goyal and Dr. Premraj has made the surgery successful. 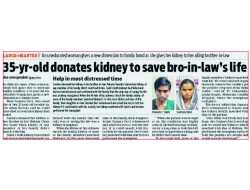 Santara donated her kidney to her brother-in-law Hukum Chandra Saini when kidney of any member of his family didn’t match with him.Saini’s both kidneys had failed and doctors had informed and confirmed with the family that the only way of saving his life was a kidney transplant.When the ill-fate of his sickness struck the family, kidney of none of the family members matched Hukum’s. In this most distressed time of the family, their daughter-in-law Santara Devi volunteered and asked doctors to test her kidney if it could match with his. Luckily for the patient, Devi’s kidney matched with him and doctors performed the transplant.

“When the patient was brought to us, his condition was highly critical. He had been kept on dialysis for a long time as both his kidneys had stopped functioning and he didn’t have much time.To his tough luck, none of the family members’ kidneys matched with his. We even contacted organ donation centres but couldn’t get the positive response from them either,” said Dr. TC Sadasukhi, Nephrologist, Mahatma Gandhi Hospital, where the transplant took place. 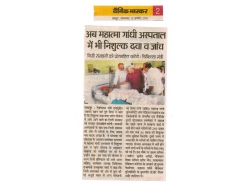