Notice regarding Reopening of MGUMST colleges

Notice regarding Reopening of MGUMST colleges

State first pancreatic Transplant is performed sucessfully at Mahatma Gandhi Hospital...
Friday was a big day for Rajasthan in the field of organ transplant.
MGH doctors performed transplant of not only liver and kidney but also pancreas transplant was conducted for the first time.
A brain dead person donated his organs which were transplanted in four different persons. Kidney and pancreas were transplanted into one patient who was suffering from hypertension and diabetes which damaged his kidney.

Special camp for fertility treatment was initiated at the Mahatma Gandhi Hospital from 16 th January to 25 january ....

Twenty two-year-old Satyabhan was brought to Mahatma Gandhi Hospital on November 4 after he was injured in a road accident in Bharatpur. Though doctors treated his head injury, he was declared brain dead on November 6 by the hospital's committee.
Satyabhan's father gave his consent to donate his son's organs to save the lives of other patients, suffering from organ failure. His liver and kidney were transplanted at mahatma Gandhi hospital and heart was harvested and transported to Eternal Hospital with the help of traffic police. 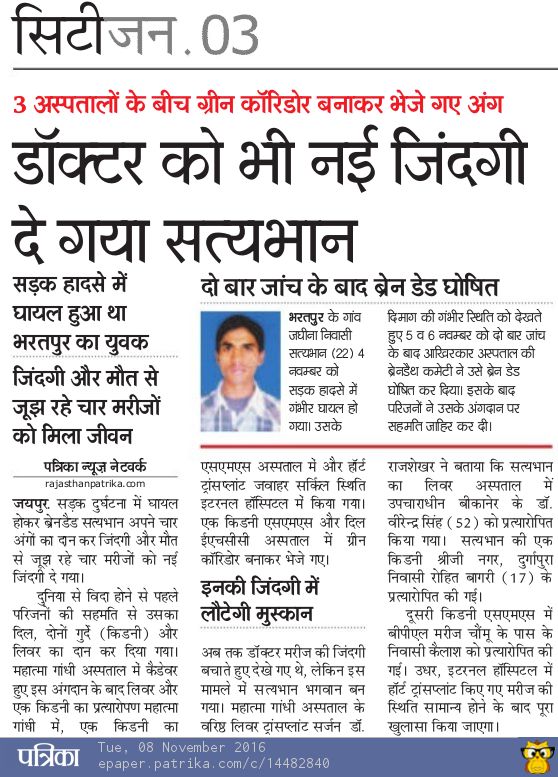 Taking a brave decision, family of a 33-year-old man, who was declared brain dead while undergoing treatment in the Sawai Man Singh (SMS) hospital on Friday, donated his organs -kidneys, liver and cornea.

“The donor Sunil has given a new lease of life to three patients.His liver has been transplanted to a 59-year-old woman with liver failure. While his kidneys saved lives of a 30-year-old woman and a 50-year-old man,

The doctors harvested his organs and transplanted them to save three lives.

The liver was transported to Mahatma Gandhi hospital and successfully transplanted by DR. Giriraj Bora and his team.

Mahatama Gandhi Medical College is the only private college in the Rajasthan who got the permission to start Superspeciality courses(DM,MCH) from the year 2016-17 in seven departments including Neurology, Nephrology,Urology, PLastic surgery, Neurosurgery, CTVS, Gasteroenterology.

A 40-year-old brain dead woman gave a new lease of life to four patients suffering from heart, kidney and liver diseases. Her heart, harvested at Mahatma Gandhi Hospital in city, was transported to All India Institute of Medical Sciences (AIIMS) in Delhi. While her other organs were transplanted to patients in Jaipur on Friday . 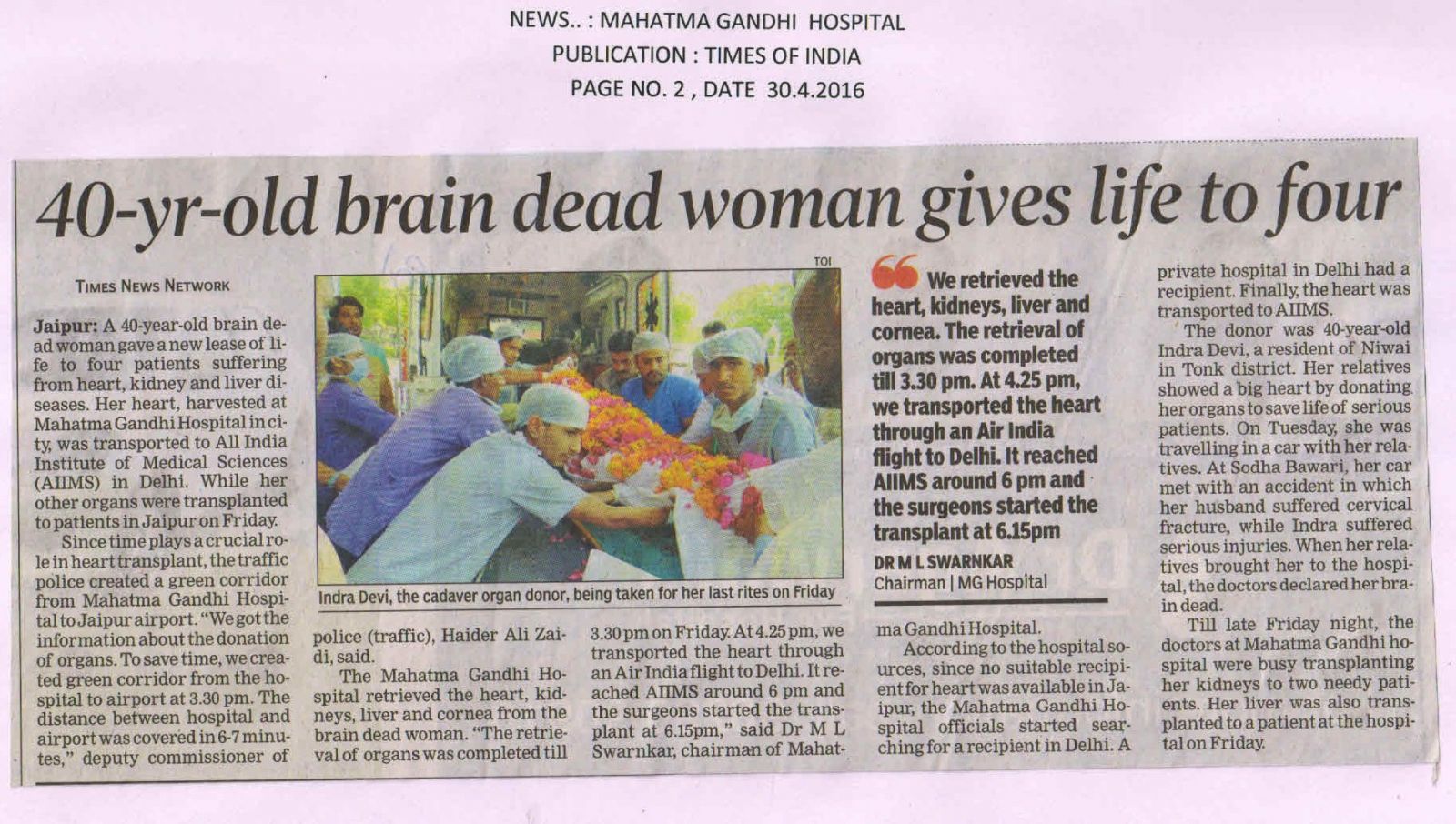 Mahatma Gandhi Medical College and Hospital transplanted a kidney of 50-yearold Kailash Singh (B+ donor) to his son Ranu Kumar (O+ acceptor),ABO incompatible transplant is a method by which an organ can be transplanted to a patient even if his blood group does not match with the donor. It is the best option for a patient who has no compatible donors in the family and the cadaver waiting list is long.

Second Sucessful Liver Transplant in Rajasthan at MGH was performed on 6/12/15.

The first liver transplant in the state at Mahatma Gandhi Hospital gave a new lease of life to 25-year-old Suresh (name changed) who was suffering from liver cirrhosis.

After 43 days of medication and monitoring by the doctors, first cadaver heart recipient of the state, 32-year old Surajbhann walked out hale and hearty from Mahatma Gandhi University of Medical Sciences and Hospital on Monday.

Mahatma Gandhi Hospital has organised a Press conference and awareness programme on the eve of World organ day . 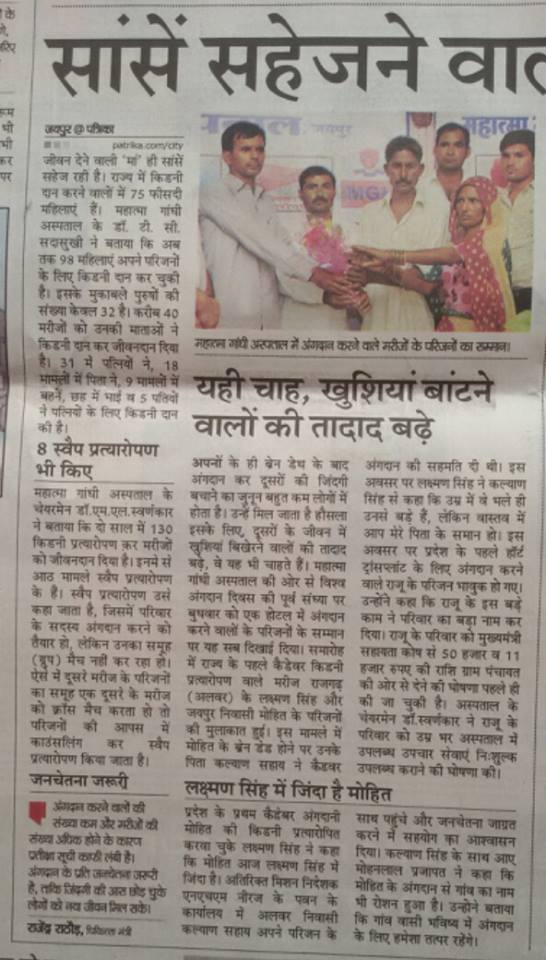 First cadaver Heart Transplant of the state was successfully done by Dr. Chisti and team CTVS of Mahatma Gandhi Hospital

Mahatma Gandhi Hospital has created a history in the state by saving lives of four persons through one cadaver organ donation. First cadaver Heart Transplant was successfuly performed at MGH on 2nd August 2015

Liver transplant is going to be start at MGH , it will become the first hospital who will perform liver Transplant in the State.

Doctors have performed one of the rarest neuro surgeries using the Navigation and Sonography Assisted Technique on Monday. This is the first time when Sonography technique has been used during a brain surgery.

First cadaver kidney transplant of the state at MGH

On the occasion of Republic Day MGH is Organising a Mega Campagin, all type of surgeries will be in Rs. 3000 (except superspeciality)

Mother's milk can save the life of an infant. It is like giving blood to an accident victim who needs it immediately,"

Mahatma Gandhi  Hospital has become the first private hospital in North India to have signed an MoU with Inaya Foundation, an NGO to set up a mother's milk bank in Jaipur.

The concept of mother milk bank gained popularity in the state after one such bank became operational in Udaipur in April 2013. The mother's milk bank has provided thousands of units of milk to infants in need and whose biological mothers were unable to feed them immediately after their birth. Each unit contains 30 ml of mother's milk.

MGH gifted a hand by replanting it to a 5 yr old female child..

On the occasion of new year our Mahatma Gandhi hospital gifted a hand by replanting it to a 5 yr old female child.. 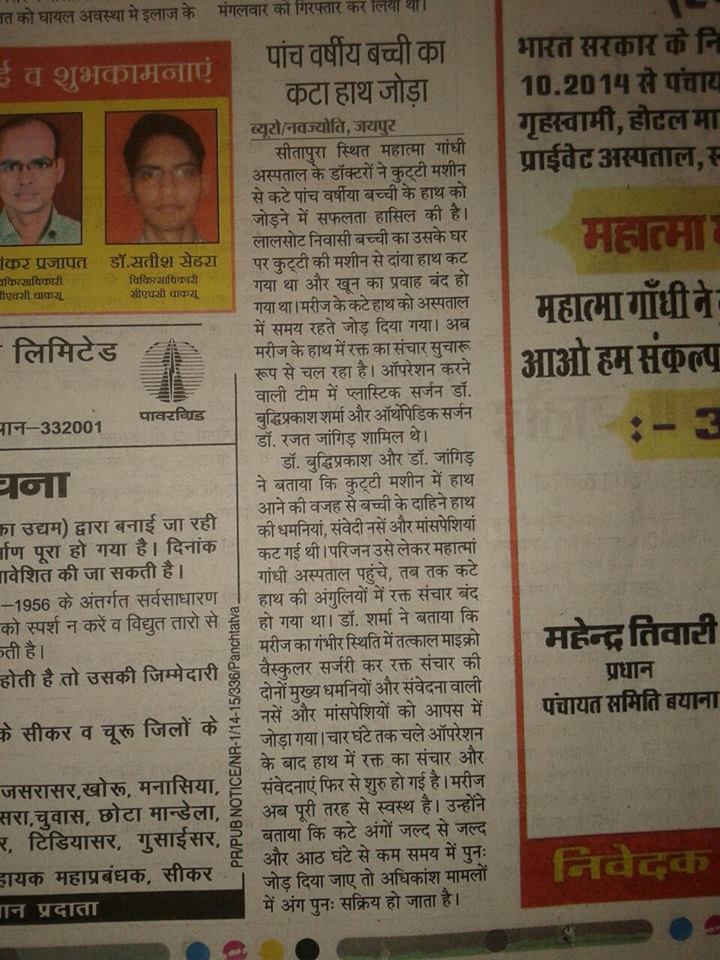 MG Center for Neurosciences welcomes Dr Pankaj Gupta MCh, Sr Professor Neurosurgery. The eminent Neurosciences team at MGH comprises of Dr Pankaj Gupta as HOD, Dr Rohin Bhatia MCh, Dr Jitendra Verma MCh and Dr Gaurav Goyal and Dr Amit Agarwal ( both DM Neurology). The new Neurosciences team will live up to the expectations of the society by providing high quality treatment services to everyone using the latest technology like minimal access brain and spine surgeries ( for the first time in the state ).

Medical and Health Minister Rajendra Rathore said the private hospitals will be allowed Kadebr transplant. Ross Medical University of Mahatma Gandhi on Sunday, Sitapur Goldsmith Auditorium Fijishin conference "Secrets Apikon" speaking as the chief guest at the closing ceremony were.  He needy Kadebr transplant patients will get new life. He went through the conference are well-researched information service in rural physicians must sustain the direct benefit of the public, to technical updates. - See more at: http://translate.googleusercontent.com/translate_c?depth=1&hl=en&prev=search&rurl=translate.google.co.in&sl=hi&u=http://rajasthanpatrika.patrika.com/news/private-hospitals-can-also-cadaver-transplant-says-rathore/1201022.html&usg=ALkJrhhUo_JEZqQAvRPntvkIL4TRFwBL7w#sthash.hU29S8eA.dpuf

25 th Annual Conference of Association of Physicians of India- Rajasthan chapter. RAJ APICON 2014  is organizing at Mahtma Gandhi university of medical Science and Technology on 15&16 November.

Application are invited for the Senior Consultant

New   Application are invited for the Senior Consultant